I’M ALWAYS AMAZED at how so many leaders can get so far without learning one of the very basic tenants of management.

It’s this: Good leaders have to give bad news.

Patty Azzarello learned this back when she became the youngest general manager in Hewlett-Packard (HP) at the tender age of 33, and she reminded me of this basic management principle recently when she wrote about How Good Leaders Share Bad News.

Strong leaders need to show up

Here’s what Patti wrote that got me thinking:

“A strong leader will always show up and will always communicate no matter what the situation, good or bad.

When people are worried, uncertain, or there is bad news, good leaders communicate more, not less.”

This basic management principle may seem terribly obvious, but I can’t tell you how many high-level leaders I’ve worked with who got where they were by basically doing the opposite.

I even learned a new term for this from The New York Times recently — “ghost boss” — and they defined it as “a manager who rarely communicates with you and is seemingly never around.” 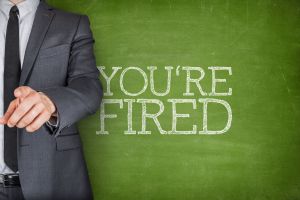 I’ve had a few of those in my career, and I’ve found that one of the times that a “ghost boss” makes sure they’re never around is when they have to step up and take on one of the biggest responsibilities a manager ever has to shoulder —letting an employee go.

Firing someone is one of the toughest things a manager ever has to do, but it’s also one of those unpleasant duties that, as they say, goes with the territory. It’s what they get paid for, and it’s one of those times they’re needed to step up and take on the dirty work.

When it comes to giving bad news, telling someone they are losing their job is about as bad as it gets.

Years ago I worked for a guy (let’s call him BB, for Big Boss) who was a senior executive and had more than 300 people working for him. He had a lot of funny quirks, but one of the oddest ones was his incessant bragging about how he had never, ever had to fire anyone.

He seemed very proud of that, and maybe he thought it proved how skilled he was as a leader, but what we learned about BB was that he had never fired anyone because he always made someone else do it — even when it came to firing someone who directly reported to him.

That’s not something any real leader should brag about because real leaders are willing do the tough stuff and communicate with those who work for them in both bad times as well as good, as Patty Azzarello always points out.

In fact, anyone who has been a leader/manager for any significant length of time and has never had to fire someone is either a) so lucky that they should be playing the lottery, or, b) the kind of person who avoids their managerial and leadership responsibilities when it matters the most.

Yes, lots of managers seem to be all about “managerial avoidance,” and that kind of managerial malpractice can cause havoc in an organization.

A metaphor for managing people

A few years ago I read a Corner Office column in The New York Times where the CEO they were interviewing had a great name for this kind of behavior — “Wilting Plant Syndrome.” The executive said his father ran a nursery when he was growing up, and he always told his son: “Don’t ever walk by a wilting plant. Get water on it right away.”

Here’s how this executive applied that to leading and managing people:

[I’m] showing my own values when there’s a wilting plant. When I see an unresolved issue, I jump in. When I’m walking around our campus, if there’s some trash there, I pick it up. There’s no elitism here and no detail’s too small. In the landscape crew, it was management by leadership. It wasn’t management by, ‘OK, you guys do this; I’m going to sit back and watch you.’  That style makes me irritated.”

“Wilting Plant Syndrome” is a great metaphor for anyone managing people, because all too often, managers, executives, and HR professionals decide to let a problem linger. They just don’t take the time to deal with it, or, they find some way to avoid it entirely.

They would rather “walk by a wilting plant” instead of taking the time to jump in and deal with the issue.

Patty Azzarello got into this when she wrote:

“One of the things that set strong leaders apart is that they personally show up in a decisive and intentional way, no matter how difficult the situation is.

There are lots of situations when a leader is faced with not having a happy story to tell. Or they have an outright disappointing story. Or they are unable to tell a complete story amidst a tidal wave of worry and questions.

So what does a leader do in these situations?”

The power of regular communication

That’s a great question — what DOES a leader do when they have to talk to their staff about a difficult, and perhaps even an ambiguous situation that they’re worried about? Here’s what Patti said:

“As a leader, I learned that the regularity of communication is the most powerful part — even more than the content. … Choosing to avoid an awkward, difficult communication may seem more comfortable in the moment (for you), but you are always causing more worry and stress for everyone involved.

I wish this was the way most leaders operated, but that’s just not the case.

I’m always amazed at how so many leaders can get so far without learning one of the basic tenets of management, and I’m equally amazed at ballyhooed companies that are so badly managed (like Uber under former CEO Travis Kalanick) that you wonder how they even manage to stay in business.

Remember: Good leaders give bad news because they know it’s a critically important part of their job. Bad leaders are clueless and try to avoid dealing with bad news at all costs. You don’t ever want to be that guy.

This was originally published on the Fistful of Talent blog.