Summer Reading: The Best Dr. Seuss Book Is One You May Have Never Heard Of

EVERYBODY SEEMS TO HAVE their favorite book by the late, great Dr. Seuss. But picking the “best” Dr. Seuss book isn’t easy.

According to The Washington Post, Dr. Seuss’s 45 plus published books have been translated into 17 languages and have sold 650 million copies in 95 countries. A number of them have also been turned into movies and television specials, including How the Grinch Stole Christmas, Horton Hears a Who, and The Lorax.

The Top 5 Dr. Seuss best sellers (as of March 2018) according to People magazine are:

Books that “prove their timelessness”

The People article, written to celebrate what would have been Dr. Seuss’s 114th birthday last March, had these intriguing details about him:

“Born Theodor Seuss Geisel, Dr. Seuss adopted his catchy moniker shortly after he got fired from his university’s newspaper for drinking bootleg gin. He then went on to have a lucrative career in advertising before he published his first book in 1937. After a few publishing flops, the world discovered his magical stories, like Green Eggs and Ham and How the Grinch Stole Christmas. In total, Dr. Seuss wrote more than 60 books (though not all of them were published).

Dr. Seuss’ success continued after his death on Sept. 24, 1991. Almost every year, his children’s books prove their timelessness by making best-seller lists.”

My connection with Dr. Seuss is pretty much the same as most people: I read a great many of his books as a child, then read them to my own children when they were young, and now I’m starting to read them to my grandchildren.

What’s different for me comes down to the choice of my favorite Dr. Seuss book, because whenever I mention the title to someone, they get a glazed look on their face and don’t seem to know what I’m talking about.

That’s probably because my favorite Dr. Seuss book is this: I Had Trouble in Getting to Solla Sollew.

Solla Sollew is “a place of hope and wonder” 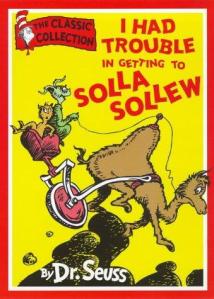 Here’s the essence of the Wikipedia description of the book:

“Solla Sollew is believed to be a place of hope and wonder, where ‘breezes are warm‘ and ‘people are kind.’ It is a dream of the characters to find this incredible place, where they will find each other and be happy once and for all. However, they cannot ever find it, saying … ‘when I get close, it disappears”‘

I’m not sure that’s the description of a book I really want to read, but that’s because it doesn’t do much justice to what Solla Sollew is really all about.

The book synopsis on Amazon.com does a much better job of describing what makes Solla Sollew so special — and what it is REALLY about:

“Dr. Seuss tackles the struggles of everyday life — difficult people, bullies, bad weather, political unrest, even crowds — in the rhyming picture book I Had Trouble in Getting to Solla Sollew. When our hero stubs his toe, he decides to find a less troublesome place to live. Soon he’s off on a journey “to the City of Solla Sollew, on the banks of the beautiful River Wah-Hoo, where they never have troubles! At least, very few.” But between his encounters with the Midwinter Jicker and the Perilous Poozer of Pompelmoose Pass, he soon finds out that confronting his problems might actually be easier than running away from them.”

Tackling one of the big challenges of life

What grabbed me about the book when I first read it was how it tackled one of the big challenges about life — how things frequently don’t go our way — and how important it is to tackle those situations head on.

That’s a great lesson for kids, of course, but one that adults can relate to from first hand experience. After all, how long does it take us to figure out that the grass is not always greener somewhere else, or that things that sound too good to be true usually aren’t nearly as wonderful as they first may seem?

THAT’S what I Had Trouble in Getting to Solla Sollew is all about.

In fact, one of the things that probably makes it one of the less popular books from Ted Geisel is that it speaks more to adults because young children just haven’t experienced the toil and trouble of life just yet. They simply can’t appreciate the lesson Dr. Seuss is teaching, or the wisdom in his solution.

As the Seuss Wiki puts it:

“This is a simple narrative of a young person finding out that we must choose our battles and that we are sometimes the ones that place ourselves in unlovely situations in the first place. An excellent read on a day that you or your youngster feels defeated by the world. It offers a springboard for a quasi-philosophical discussion about who we are, where our troubles come from, and how to negotiate between dire and paltry problems. Please be aware that the book’s ending is confrontational and would be best metered with a “how else can we approach a bad situation” question.”

Confronting problems rather than avoiding them

Yeah, the ending IS confrontational, but it points out what we all know about handling  problems — it is better to confront them head-on than avoiding them altogether.

If that’s a confrontational approach, so be it, but it’s one reason why I Had Trouble in Getting to Solla Sollew is such a great book to read from time to time, because it reminds us that almost no one goes through life without problems, and that it’s all about how we choose to deal with them.

That’s a great lesson for adults, of course, but a good one to start impressing upon your children and grandchildren, too. It’s well worth you spending some time with.