One Last Lesson From Charles Krauthammer: How You Die Speaks Volumes About How You Lived

SOMETIMES, I FEEL THE PULL of my Native American ancestors.

My Indian blood lines are from my great-grandmother Marion Beaver, who was from the Narragansett tribe, and I  feel them tugging at me sometimes, particularly when it comes to wisdom about how we live our lives.

Strange as it sounds, Death is one of things we could all be wiser about.

I’ve been thinking about this as I reflect on the announcement Friday by Pulitzer Prize-winning columnist and Fox News contributor Charles Krauthammer that he is dying and only has a short time to live. In his final, brief Washington Post column simply titled  A note to readers, he writes that,

“In August of last year, I underwent surgery to remove a cancerous tumor in my abdomen. That operation was thought to have been a success, but it caused a cascade of secondary complications — which I have been fighting in hospital ever since. It was a long and hard fight with many setbacks, but I was steadily, if slowly, overcoming each obstacle along the way and gradually making my way back to health.

However, recent tests have revealed that the cancer has returned. There was no sign of it as recently as a month ago, which means it is aggressive and spreading rapidly. My doctors tell me their best estimate is that I have only a few weeks left to live. This is the final verdict. My fight is over.”

A huge outpouring of tributes 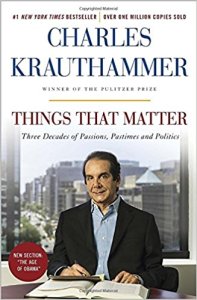 Somewhat surprisingly, particularly in the hyper-partisan age we live in, Krauthammer’s announcement produced a huge outpouring of tributes from across the political spectrum. The San Diego Union-Tribune dug into this, saying:

“A lot of people have said a lot of things about Krauthammer over the years. Trump, while campaigning for president, called him a jerk. But others have spoken highly of him.

A former editorial page editor for The Washington Post once called his work “independent and hard to peg politically.” And David Brooks of The New York Times called him “the most important conservative columnist right now.”

On Friday, there was a strong show of support for Krauthammer, including an editorial from The Washington Post titled “Fridays without Charles” in which its editorial board praised his work. … The columnist’s letter also drew many acknowledgments on social media from conservative figures like columnist Ben Shapiro, Vice President Mike Pence and Sen. John McCain.”

Just what was The New York Times thinking?

Oddly, in their own turd-in-the-punchbowl moment, The New York Times seemed to go out of its way to make sure the story it published about Krauthammer’s impending death did as little as possible to mention his long relationship with Fox News that did so much to make him a well-known and highly-visible commentator.

Despite the fact that it was his commentary on Fox News that really made Krauthammer nationally famous outside of the insular New York-Washington media axis, The Times didn’t mention his affiliation with Fox News until the fifth paragraph of its Friday article.

Here’s my question: Don’t they have any non-partisan editors at The New York Times anymore? I can understand this from the bickering amateurs who publish Wikipedia, where Krauthammer’s page doesn’t even list his Fox News career as one of his “Notable Credits,” but The New York Times?

As a longtime editor myself, I can’t believe that ANY editor on America’s Newspaper of Record would fail to make sure that Charles Krauhammer’s most well-known media platform was not mentioned in the lead of their story on him. I hate to say this, but the omission seems to be media childishness, pure and simple.

The New York Times should be better than this, but are you surprised that they’re not? This is the kind of petulant partisanship that passes for “resistance” in the Age of Trump.

It’s way off base too, because Krauthammer has been rightly praised for his intellect and thoughtful commentary. As fellow Washington Post colleague and Pulitzer Prize-winning colleague Kathleen Parker wrote, “Whether in writing or on TV, it never seemed as though Charles had a personal ax to grind. Between his calm demeanor and a probing intellect, he seemed most like an anthropologist remarking upon the fascinating behaviors of an indigenous people.”

Here’s a brief sample of that probing intellect, where Krauthammer discusses the trend of tearing down Confederate monuments with his Fox News colleague Tucker Carlson. It’s a classic example of how Krauthammer could thoughtfully make sense of a highly-controversial topic:

Tecumseh’s words of wisdom on the end of life

I was struck by one more comment Kathleen Parker made about Krauthammer’s final column. She noted that,

“Most people don’t get to say goodbye, and almost none as eloquently. (Charles) thanked all who have helped him along the way, including colleagues, as well as his readers and television viewers, ‘who have made my career possible and given consequence to my life’s work.’ “

Few of us know when death will greet us, and fewer still will have an opportunity to reflect on their life before it does, as Charles Krauthammer has done.

This is what makes me feel the pull of my Native American ancestors, particularly Tecumseh, the famous and celebrated Shawnee chief, who had these words of wisdom about the end of life:

When your time comes to die, be not like those whose hearts are filled with fear of death, so that when their time comes they weep and pray for a little more time to live their lives over again in a different way. Sing your death song, and die like a hero going home.”

I thank my colleagues, my readers, and my viewers, who have made my career possible and given consequence to my life’s work. I believe that the pursuit of truth and right ideas through honest debate and rigorous argument is a noble undertaking. I am grateful to have played a small role in the conversations that have helped guide this extraordinary nation’s destiny.

I leave this life with no regrets. It was a wonderful life — full and complete with the great loves and great endeavors that make it worth living. I am sad to leave, but I leave with the knowledge that I lived the life that I intended.”

How many of us will be able to say we have no regrets and lived the life we intended when our time comes?

Charles Krauthammer has sung his final death song and he will surely “die like a hero going home.” He’ll be missed by many, especially in today’s toxic media environment where we need more of the reason and thoughtfulness that he so skillfully espoused.

So RIP, Charles Krauthammer. Even at the end, you are proving to us again that how one dies speaks volumes about how one has lived.