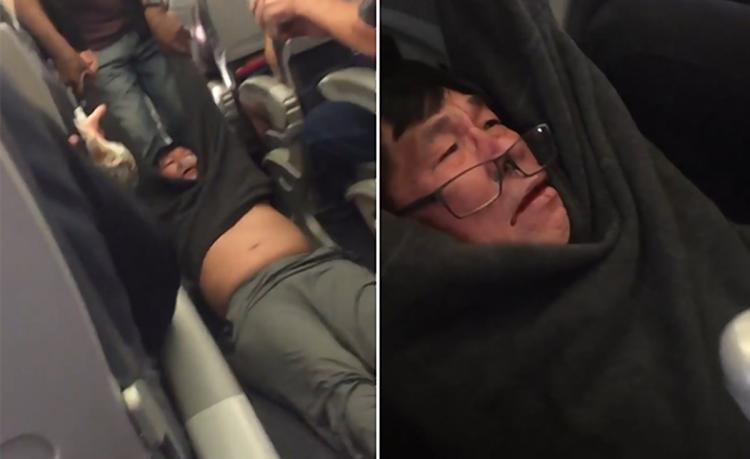 BELIEVE ME when I tell you this: I soured on the customer service practices of United Airlines long before they decided that dragging people off planes would enhance the flying experience.

You’ve probably seen the video by now. You know the one — where the customer on the last flight of the night from Chicago to Louisville refuses to give up his seat (he’s a 69-year-old doctor who said he had an appointment first thing in the morning), so when the travel voucher carrot failed to nudge him, the airline resorted to good old-fashioned thuggery and had airport police forcibly drag him off the plane.

As the great humorist Dave Barry would say, I am not making this up.

But, I’m also not surprised because I was once a top level frequent flier on United. I was what they call a 1k flier — 100,000 miles per year, the top tier — but I gave it all up a few years ago because of United’s increasingly crappy and indifferent service.

I remember thinking at one point after a particularly disagreeable United customer service encounter: If they are treating a top-level frequent flier this way, how are they treating everyone else?

After seeing the guy getting dragged off the United flight in Chicago, now I know.

A reflection of organizational values

The Internet has just about blown up over the United incident, but to me, it’s simply the latest example in the ongoing downward spiral of customer service and company culture.

You probably know this too, but with a few notable exceptions, customer service in America stinks. In fact, good service is so unexpected that I find myself generally stunned on the rare occasions I luck into it. For the most part, customer service today is marginally helpful at best, or, United Airlines style, drag-them-off-the-plane-if-they-don’t-like-it at its worst.

And this is the key: The quality of customer service reflects an organization’s cultural values. When service goes bad, it’s usually because the company culture has gone bad, too.

Adam Hartung at Forbes was spot on about United when he wrote:

“Most of us would not believe this story if it were part of a fictional movie. How could it be possible for a front-line employee to think it is acceptable to forcibly eject a paying customer already on the plane? How could it be possible that a CEO would be so uncaring as to not apologize for a clear, horrific lapse in judgement by someone on his management team? Whatever the situation, every action taken by United merely served to make the situation worse. How could a company so large be so mismanaged — from the bottom to the top?”

This is the United Airlines culture I became so familiar with.

Hartung chalks this up as the result of the corporate push for “operational excellence.” He says that with this strategy, “They become so focused on efficiency, cost cutting and business operations that they forget about customers — or anything else. All that matters is keeping the business operating, while trying to keep costs as low as absolutely possible. Management, from bottom to top, is rewarded for operational performance, while all other metrics are ignored. Including customer satisfaction.”

The mark of a broken corporate culture

Let’s be clear here: ANY strategy where high-level customer service isn’t the goal is the mark of a broken corporate culture, pure and simple.

On top of the customer service issue, United has another big issue with damage control.

It took United CEO Oscar Munoz until Day 2 of this crisis to finally issue a clear and sincere apology for what happened, and although he immediately jumped to the defense of United staff, yesterday he finally sounded a little humble, contrite and leader-like:

“No one should ever be mistreated this way. … Like you, I continue to be disturbed by what happened on this flight and I deeply apologize to the customer forcibly removed and to all the customers aboard. … It’s never too late to do the right thing. I have committed to our customers and our employees that we are going to fix what’s broken so this never happens again.”

This is — finally — a forceful and forthright statement of apology and regret, and it is good for CEO Munoz to say it.

But, it makes you wonder — why didn’t he issue an unequivocal apology like this in the first place? Why did it take him two days to do it? Again, it’s clear that United’s culture needs some work from the very top of the organization down.

Why I stopped flying United

Adam Hartung’s Forbes article lists a number of well-known customer service incidents by United, and they mirror my own experience with the airline.

Although I was a high level frequent flier, that seemed to matter less and less as time went on. Despite my frequent flier status and 800,000 miles traveled in the “friendly skies,” I found that more often than not, I was treated like crap by United Airlines.

Ticket agents and gate personnel seemed to be getting surlier and less helpful, and the planes were dirtier and had lots of little things wrong with them. Overall, the customer experience was rapidly deteriorating.

The coup de gras came one day when I was checking in for a flight and the ticket agent suggested that, for $75, I could go out on a flight an hour earlier. Yes, I would lose my bulkhead seat, but I would get where I was going a little sooner.

Well, the new flight I paid $75 to get upgraded to got cancelled, and I got pushed back onto my original flight. However, my spacious bulkhead seat was gone and the only one left was in the very last row of coach with a couple and their baby. The kid was a lap child, so there were four of us (OK, maybe 3 1/2) crammed into three seats, and the baby wailed all the way from Southern California to Chicago.

By the way, United was unapologetic about any of it and curtly refused to refund my $75 upgrade fee. Caveat emptor, I suppose. The message to me was pretty simple: My high level frequent flier status didn’t mean squat.

So, I stopped flying United and started flying American, and although I have had the occasional problem, American’s personnel are mostly calm, pleasant, and as helpful as the system allows. I’ve flown about 750,000 miles since I made the change — miles that I used to fly on United.

Does United management even care?

As far as I can tell, nobody at United cares about that. Surprisingly, I never heard one word from United at all. One would think that they would be concerned when a high-level customer simply stops flying with them altogether, but I have never once had any communication from United simply asking, “Hey — what happened to you, and what can we do to get you back?”

This is the end result when you don’t have a top-down commitment to culture, and allow an uncaring attitude to manifest itself in your day-to-day customer experience. It’s almost like United has never heard of Southwest Airlines, where customer service is at the core of EVERYTHING they do.

Adam Hartung at Forbes points out that, “United clearly needs a cultural change. But … So far United’s leadership has failed to see the obvious.”

He’s right of course, but when the obvious isn’t so obvious to senior management, it’s probably time for both a change in culture AND in top-level leadership. Too bad it takes forcibly dragging a paying customer off a plane to wake people up to it.

This originally appeared on the Fistful of Talent blog.