IT TOOK A WHILE, but I finally have some faith in some of our elected officials.

I’ve been pretty blunt in my criticism of them, particularly the State Legislature. We send them to Sacramento to solve the many problems the less-than-Golden State is facing, only to find that once they get there they waste time pushing their pet peeves and other nonsense — like wasting time designating surfing as the state “sport.”

Somehow, I don’t think voters are electing them for THAT.

Although local officials have their own issues, they’re generally more pragmatic in their governance, probably because they have to deal with the many mandates Sacramento wants to shove down their throats.

That’s why I applauded the backbone exhibited by the little city of Los Alamitos last week, when they publicly stood up and pushed back against the State Legislature and said they would not enforce Senate Bill 54, the “sanctuary state” law that restricts the ability of local law enforcement to cooperate with federal immigration authorities.

The OC pushes back against the “sanctuary state”

And that’s why I also applauded Tuesday’s 4-0 vote by the Orange County Board of Supervisors “to join a federal lawsuit against California’s sanctuary laws,” according to the Los Angeles Times.

It gives me hope to see the Board of Supervisors of my home county step up and do the right thing in regards to our so-called “sanctuary state,” because frankly, I had just about given up hope that ANY of our elected officials would ever speak out against the divisive and illegal tactics of those who control our state today.

It also shows that although Los Alamitos may be small (population – 12,000), their powerful action to lead the charge against the “sanctuary state” law gave others the courage to follow suit.

Los Alamitos started this, and they deserve our thanks

We ALL owe a debt of gratitude to LosAl for leading the charge on this one, because being out in front can be a lonely and dangerous place. And despite the sneers from the “sanctuary” crowd that the action by the Los Alamitos City Council was insignificant because of the size of the city, their leadership on this issue seems to have helped push one of the most populated counties in the country to follow suit.

The LA Times story on the OC Supervisors vote also noted that, “Other cities in the county, including … Buena Park, Huntington Beach and Mission Viejo, are also starting to take action to voice their grievances against the state’s sanctuary laws.”  And Yorba Linda’s council agreed last week to file an amicus brief to the federal lawsuit against those laws as well.

To me, the entire notion of a “sanctuary state” is a non-starter.

As I wrote last October in a post titled Dear California Legislature: What if I Don’t Want to Live in a “Sanctuary State?” ,

“The whole notion of resistance, of sanctuary, of telling the federal government they can’t enforce immigration law in California now because they did it so terribly before, is all wrong-headed. No matter how you feel about Trump, he’s simply doing what a lot of people elected him to do.

The federal government can be exasperating to deal with, but I hate that California and it’s deep blue political leadership seem to want to nullify federal law.

As a native Californian, I also hate that I now live in a “sanctuary state.” Making such a sweeping and far reaching declaration is not something that should be done without the people weighing in and letting our elected legislators know what WE THE PEOPLE really think.

If Governor Brown had really played his role as the only responsible adult in Sacramento, he would have vetoed this bill and suggested the Legislature put it to a vote instead.”

The curse of Kevin DeLeon

Kevin DeLeon, the outgoing leader of the State Senate who needs a new job and now wants to replace Diane Feinstein in the U.S. Senate, is the man behind all this “sanctuary state” bill nonsense.

And speaking of DeLeon, his statement about the OC Supervisors vote on Tuesday was typical of the blather you hear from him. As the Orange County Register noted,

“Sen. Kevin de León, D-Los Angeles, chastised Orange County leaders in a statement Tuesday: “This kind of obsessive immigrant bashing is embarrassing to the county and its residents, and seems designed to court the approval of a racist President and his cronies.”

DeLeon’s statement is amazing in a number of ways. Not only does it broad brush anyone who pushes back against the “sanctuary state” law as “racist,” it also claims that anyone doing so is also “anti-immigrant.”

Orange County Supervisor Michelle Steel, who is Korean American, made this very point before Tuesday’s vote.

“I’m a legal immigrant,” she said. “We are not talking here about law-abiding immigrants but criminal aliens. SB 54 is totally unconstitutional.”

As I wrote about this back in October,

“America has ALWAYS been a nation of immigrants and we are better off because of that. But no nation can survive with open borders and uncontrolled numbers of people coming, and staying, illegally.

That begs the question — if you can get all the rights of being a citizen without having to go through the hard work of becoming one, doesn’t that discourage people from becoming Americans in the first place? It’s a big problem because what has truly made America great is the notion that immigrants come to the United States for a better life AND to become Americans.”

Time for more Californians to stand up and be counted 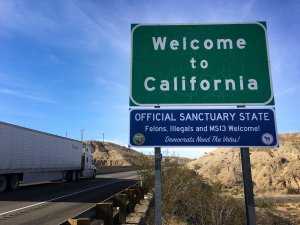 I don’t believe in the “sanctuary state” law any more than I believe we can, or should, send all the illegal immigrants back to where they came from. What we need is real, sustainable immigration reform, and Congress has been derelict in it’s duty by not seriously attacking this problem, or the issue of the “Dreamers,” or any other related immigration issue.

But having the State Legislature ram something like Senate Bill 54 down the throats of 39 million Californians without a broader debate or public vote is flat out wrong.

Now, all that is changing.

First it was the Los Alamitos City Council, and now it’s the Orange County Supervisors pushing back, but don’t be surprised if a lot more cities and counties take a stand against the damage that our state representatives are doing to us with “sanctuary state” bills that seek to bully them into accepting the Legislature’s premise that California can unilaterally decide that certain federal laws are null and void.

People are seeing that the time to stand and be counted has come. It’s about time.